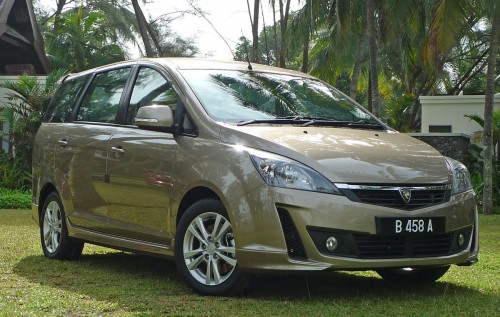 It’s the hottest model of the moment, and the most talked about for sure. It’s also the first recipient of Proton’s long awaited turbocharged engine, the Campro Charged Fuel Efficiency (CFE). It’s the refreshed Exora, the Exora Bold.

After countless sightings, both clothed and naked, Proton finally officially unveiled the Exora Bold and the range topping Exora Prime last Thursday. With an aggressive facelift and a new powertrain that’s so much more appealing on paper, the Exora is making a strong case to be the best MPV under RM100k.

We’ve driven it already – first impressions and full gallery after the jump.

Here’s a refresher on how the refreshed MPV stacks up. The Exora Bold wears a new face that’s well, bolder and more aggressive, mainly due to the “fanged” lower bumper. The headlamps have darkened housings and the elaborate rear lights have a “tinted” look as well.

There’s a subtle bodykit, including a rear diffuser style piece (painted black) and larger 16-inch wheels. The latter plays a big part in the sportier image and its double-spoke design is much better than the plain old one. I quite like this new Elegant Brown hue, too. It looks rather handsome for a big box, and quite premium relative to price point rivals.

Kit-wise, the Premium CVT is well stocked. Two-tone leather seats with matching door cards, leather-wrapped steering, fog lamps, electric foldable wing mirrors, cruise control and reverse camera with rearview mirror LCD are standard. The latter is useful and similar to the system seen in the Kia Forte 6-Speed. The centre stack, which houses a Clarion head unit with Bluetooth and AUX, is finished with “liquid silver” trim. Wood is reserved for the six-seater Prime.

As usual for the Exora, there’s an overhead DVD player (also accepts USB and SD cards) with flip out LCD screen and roof air con vents for every row. A/C fan speed for the rear section can be independently controlled.

The highlight is of course the CFE engine, which is the latest iteration of Proton’s Campro. Following the downsizing method of a forced-fed smaller capacity engine in place of a say, 2.0L NA unit, the CFE puts out 138 hp and 205 Nm, healthy figures by any measure. By the way, CFE did not start life as a Campro CPS, but is massively reworked from the original Campro engine.

Besides the soft turbocharger (0.75 bar), there’s intake VVT (first in the Campro series, not to be confused with CPS, which is more of a valve lift system) and a “torque-based” 32-bit ECU unique to the CFE. On a whole, engineers say that 70% of engine components are new and unique to the CFE. On the spec sheet, you’ll notice a shorter stroke and lower compression ratio (8.9 instead of 10). Look at the diagram for the rest of the changes.

Paired to the Punch sourced continuously variable transmission (CVT), 0-100 km/h is done in 11.3 seconds, not 13.3 seconds as previously thought. We now have a hard copy of the brochure, which lists the faster time. The 13.3 figure came from the leaked scan sent to us by a reader, which is an older and not-finalised version of the brochure. Quoted top speed is 185 km/h and fuel consumption at a constant 90 km/h is 7.8 litres per 100 km.

By the way, the CVT unit used here is not identical to the one used in the Saga FLX. The one here (internal code CVT3) comes with a higher torque rating (220 Nm instead of 186 Nm) and the oil cooler is also more powerful (12.5 kW instead of 10 kW) to cope with the higher load. Also, Proton will only use the original CVT fluid (ExxonMobil EZL799) to maximise reliability.

The CFE + CVT drivetrain completely transforms the Exora experience. Proton’s first full MPV was a good drive all along, bringing a more sophisticated level of ride and handling to the affordable MPV sector. It is also family friendly, comes with more space than price rivals and has all the features one expects for the money. However one major “could be better” point for us was the strength of the Campro CPS mill, or rather the lack of.

You see, the 1.6-litre CPS is the sort of motor that requires “spanking” to get the best out of it, coming alive in the higher regions of the tacho. This isn’t a bad thing in itself, and there’s a certain pleasure to be had in coaxing out the performance, but an MPV isn’t the best vehicle for such histrionics. It is the lack of low end torque that gave rise to the impression of the Exora being “underpowered.”

Enter the turbocharged CFE. With peak torque of 205 Nm coming into play at 2,000 rpm and staying there all the way to 4,000 rpm, the previously lethargic approach has been banished for good. Combined with the instantaneous rise in revs brought by the CVT, the Bold is quick off the line and response is good. The CFE isn’t as smooth revving as the 1.6L Prince engine found in Peugeots and MINIs, but it’s not particularly coarse as well, so all’s good.

Usual CVT rules apply, so when one’s in a hurry, there’s a lot of groan and moan from the engine. But there’s a Stepped Automatic Transmission (SAT) button that causes the ‘box to emulate a six-speed conventional torque converter AT. Press it and you do feel the revs fall back “for the next gear,” but the “gearchanges” are blunt and slow.

We first encountered the AT-mimicking CVT in the facelifted Corolla Altis, and Toyota’s rendition remains more convincing. Otherwise, the Punch CVT works decently enough, even if it falls short of Nissan’s CVTs for cohesiveness. Personally, I’m not a fan of CVT, but Proton picked it for efficiency, and you can’t argue with that.

There is another function that eluded most of us journos, the “L” function. Pushing the lever down from D to L is sort of like activating a “Sport Mode”, where the revs rise by about 1,000 rpm with the same throttle opening, giving more sense of urgency along with some added noise. However, I found the physical shift action from D to L a little sticky. Small matter, that.

Drive-wise, the Exora rides well despite the wheel upsize to 16 inches. It showed a steady high speed highway ride and good composure on the poorly surfaced B roads that made up a big portion of our route to Tanjung Jara on the East Coast. Unlike some rivals, there’s no hopping around at the rear, and even the few big potholes we hit met with adequate damping.

Steering precision and feel were a little short of Proton’s usual standards, but just about acceptable for an MPV. However, they could have done better than the GT Radial Champiro tyres on our test car. A tyre swap will be a good investment.

From the driver’s seat, the view out is superb, thanks to the generous glass areas (passengers will enjoy this too) and the new reverse camera with rear view camera display is very useful. I also liked the feel of the chunky leather wrapped steering wheel and the individual fold down arm rest for the front seats.

One inconvenience is the process of jogging the info (range, average FC, etc) on the trip computer. There’s just a single button, so you press it till “ODO” shows on the right display, before doing a long press to switch data on the left display. Quite hard to fully concentrate on the road ahead when doing this.

As a middle row passenger, I was thankful for my personal air con vent (rear section fan speed is independently controlled) and the ability to catch a movie (I didn’t), but felt that the bench was a little short and flat.

With the addition of a turbocharged engine and more kit, it’s easier to forget that the Exora Bold is not a rival to the Mazda 5, Honda Stream, Peugeot 5008 and gang, but an RM80k MPV that fights cars like the Toyota Avanza and Nissan Grand Livina. The Proton is a more sophisticated and well-rounded product than those two – it drives better, has a lot more go, has more space and more kit. If a foreign badge is not a must have, this is the best MPV below RM100k one can buy in Malaysia.